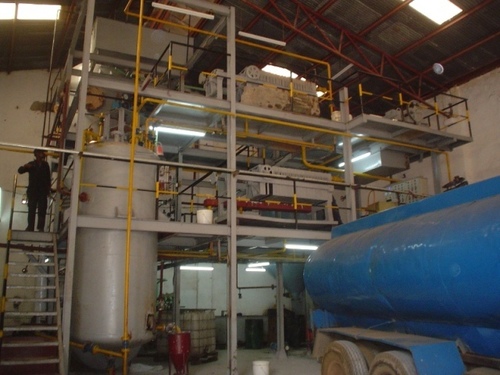 Refining of the oil, there are three basic processes in the Batch refinery

Neutralizer to remove the Free Fatty Acids (FFA) by adding caustic soda. Oil is heated up to about 60°C by heating coils and oil is stirred by stirrer. Then soap stock formed due to chemical reaction between free fatty acid and caustic soda which are allowed to settle at the bottom of the neutralizer from where it is taken out into soap stock tank.This oil is washed with hot water to reduce extra caustic and soap ppm in the neutral oil.Some oil like Soya bean oil requires to Degumming, the process in batch system calculate amount of phosphoric acid add before adding caustic in neutralizer.

Neutralise oil is heated in bleacher at 100’C to 110’C under vaccume.After reaching the temperature by adding Bleaching earth the color remove by the process called adsorption process. Where all coloring pigments are adsop on the surface of the bleaching earth, this is catalytic reaction. Color pigments and bleaching earth remove by filtering system.

The bleached oil is heated in the de odorize to remove odoriferous materials like phenols tocopherols aldehydes, ketones which are basic responsible for color of oil. This all odoriferous material evaporates by high temperature at 180’C to 240’C under high vacuum systems.Thermic Fluid Boiler, Vacuum Pump, Barometric Condenser, Catchol, Steam Generator etc. play their role in the refining process. So these equipments are part of the refinery and connected with the vessels through pipelines.

De odorized oil is requires cooling at atmospheric temperature to avoid oxidation.De odorized oil cool in the cooler with cooling media upto 45’c.Before sending this oil for final packaging oil is pass through the bag filter

Like sunflower oil which contain some wax is requires to remove before packing. This process oil is pass through chill media reduce the temperature at the 5’C to 10’C then pass through the filter to remove wax.

We make all ranges of Refinery from 1.5 MT/Batch to 12MT/Batch 5 MT to 50MT per day with high efficient technological machineries